Home News Osimhen Fires Napoli To Top Of Serie A 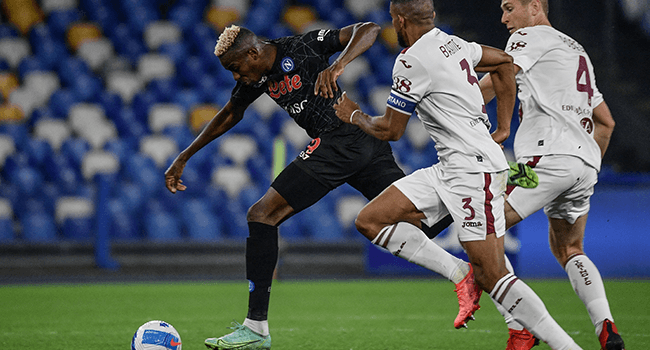 Osimhen Fires Napoli To Top Of Serie A

Napoli returned to the top of Serie A on Sunday after Nigerian international Victor Osimhen scored the only goal in a hard-fought 1-0 win against Torino.

AC Milan had moved to the top of the table after battling back from two goals down to beat Hellas Verona 3-2 at the San Siro on Saturday.

But Napoli moved back to the summit after Osimhen, who had scored for Nigeria in a 2-0 win against the Central African Republic in World Cup qualifying last week, headed the 81st-minute winner.

Lorenzo Insigne’s weak first-half penalty was saved and Mexico international Hirving Lozano hit the post before Osimhen made the most of an attempted clearance that ricocheted off team-mate Eljif Elmas.

“It was the most important goal of my career,” said Osimhen.

“I’m so pleased. The atmosphere at the stadium was incredible. The fans pushed us forward and we managed to get the three points.

He added: “We never gave up; we attacked until the end and deserved the win. I saw the ball fly up and I thought I could get there before the defenders. I connected well and scored such an important goal for me and the team.”

Napoli have 24 points, two more than AC Milan, after equalling the best start in club history, having also won their first eight games in 2017-18.

Reigning champions Inter Milan are on 17 points after losing ground following a 3-1 defeat away to Lazio on Saturday.